JAGTIAL: Continuing his scathing attack against the TRS, State BJP president Bandi Sanjay Kumar likened the ruling party to a sinking ship. He also pointed out that this was the reason why Chief Minister K Chandrasekhar Rao, after his Delhi visit, has confined himself to his farmhouse. 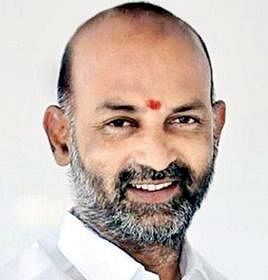 He also mentioned that the TRS supremo is taking all steps to make party second-in-command KT Rama Rao the next Chief Minister of Telangana.The saffron party chief made these statements while addressing the media after taking part in various programmes at Govindaram village on Friday.

Referring to the lathi-charge on BJP leaders in Jangaon town recently, Sanjay Kumar said that since the government continues to neglect their demands, there would be serious retaliation from the part of BJP cadre.Alleging that the pink party leaders are selling Central welfare schemes as their flagship programmes, the BJP chief criticised the TRS for using only the Chief Minister’s pictures in the flexis of such schemes and not including images of Prime Minister Narendra Modi.

Pointing out that the people of Hyderabad understood the pink party completely, which was why they taught it a befitting lesson in the GHMC polls, Sanjay Kumar further criticised the State government for not allocating funds it received from the Central government.

Stay up to date on all the latest Telangana news with The New Indian Express App. Download now
TAGS
Bandi Sanjay Kumar