Every individual in the state will be administered the Covid vaccine, Health Minister K K Shailaja has said.

KANNUR: Every individual in the state will be administered the Covid vaccine, Health Minister K K Shailaja has said. She was in the district to review the health department’s preparations ahead of the vaccination drive on Saturday. She said the priority of the recipients would be decided as per the availability of the vaccine. “If the state receives enough stock for everyone, the government will ensure that each individual gets vaccinated. We will make use of the facilities in every health centre across the state. The state is well prepared to move in this direction,” she said. 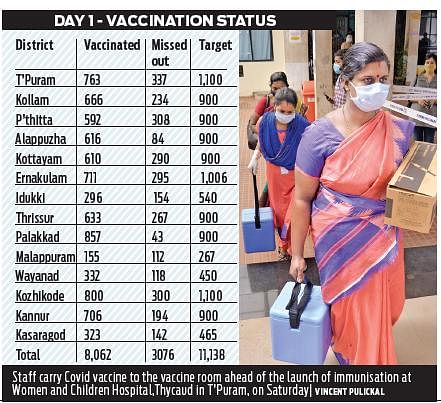 The vaccine has lifted our spirits and restored our hope in being able to tide over the pandemic, she said. “It is through mass vaccination drives that the world has survived many epidemics in the past, including polio, diphtheria and smallpox,” she added.

The health workers deserve a pat on the back for their relentless fight against the disease, she said. “The situation was so grave that it was becoming impossible for the department to stop the spread with limited resources. Still, they powered through and gave it all. It is their commitment which brought the death rate down to 0.4 per cent,” said the minister. Besides, the government, police, district administrations, local bodies and the public played a significant role in curbing the spread.

The entire system functioned like a well-oiled machine, she said. The media too played their part to perfection and ensured that the public stayed aware and informed about the situation at tall times, she added.“However, we aren’t out of danger. The first dose is followed by a second one after 28 days. Developing resistance is a slow process. So don’t let your guard down just yet. Continue adhering to the Covid protocol till we are absolutely out of risk,” she said.

At one stage, the state was preparing itself for 20,000 positive cases a day. But through systematic preventive measures, we avoided that situation from happening, she said. She said that compared to other states, when they were at the peak of the spread, Kerala was doing much better and that it wasn’t fair to criticise now.

5,960 new Covid cases in state
T’Puram: The state recorded 5,960 fresh Covid-19 cases on the day, even as the state began its vaccination drive. A total of 64,908 samples were processed on the day and the test positivity rate stood at 9.18 per cent. Twenty-seven more people died due to Covid-19 in the district on Saturday, taking the death toll to 3,442. With 5,011 people recovering from the disease, the total recoveries crossed 7.70 lakh in the state. Of the 56 returnees who tested positive for the disease, nine contracted the new Covid-19
strain.