Just as there were glitches with the Co-WIN  portal during the dry run, Day 1 of the Covid vaccination launch saw technical issues once again.

BENGALURU: Just as there were glitches with the Co-WIN portal during the dry run, Day 1 of the Covid vaccination launch saw technical issues once again. The snags were present in the morning half of the drive and were set right in the second half of the day. Staff in various hospitals manually kept a track of who got verified and vaccinated as they could not upload the data.

“Until about 3 pm, the internet connection and Co-WIN portal were both down. We manually ticked who got vaccinated. Once the portal began working, we updated the data,” said Dr Krishnaiah, medical superintendent, Jayanagar General Hospital, Bengaluru. Those who got vaccinated earlier in the day in this hospital, did not receive the automatic message confirming their vaccination immediately due to the glitches in the Co-WIN app. It came after a while. However, those who were vaccinated later, received instant confirmation messages.

In Sir CV Raman General Hospital, some healthcare workers said they did not receive a message a day before, asking them to come for the vaccination drive on January 16. However, they turned up as they were on the first list put together by the hospital and submitted to BBMP. “The Co-WIN portal was extremely slow and there was a server issue as people from all over the country were logged into it. We kept track of the beneficiaries manually,” said a doctor from CV Raman Hospital.

In some places, the hospital staff were alerted about possible technical issues, a day in advance. A BBMP Health officer present at the KC General Hospital vaccination site said, “The Co-WIN portal did not work throughout the day. We were alerted by the health department on Friday evening that there could be a hitch on Saturday and were asked to be ready to take down information manually. This is double work for us because when the portal starts to function, we need to add the details of the beneficiaries. The portal needs to be fixed as soon as possible.” 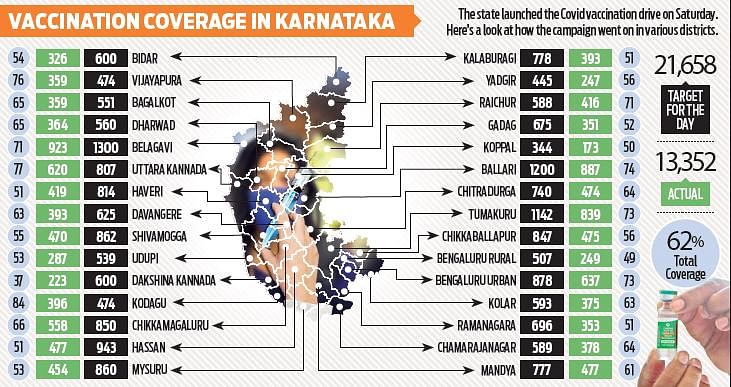