Up above the world with 'The Himalayan Arc'

The Himalayan Arc: Journeys East of South-east, an anthology of writings, edited by Namita Gokhake, is a collection of over 25 narratives revolving around these mountains by more than 30 writers.

Living a lifetime in the first foothills of the Himalaya, I sometimes feel like an indigenous species. Born in Landour, a twin of the hill station of Mussoorie, I have spent my days a mile high in the sky. The Himalayan Arc: Journeys East of South-east, an anthology of writings, edited by Namita Gokhake, is a collection of over 25 narratives revolving around these mountains by more than 30 writers. Their stories come far and wide—from Afghanistan in the west to Assam in the northeast. The scale of the Himalaya is immense. The mountains are greater than any other ranges anywhere else in the world. Packed between the book covers are tales of life as it is lived in these mountains. There is poetry, folk tale, lifestyle and politics to bring out the many aspects of the Himalayan arc. 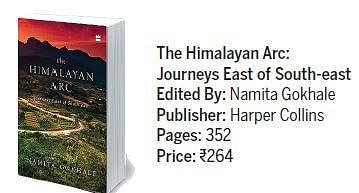 Blended together is a mix of writing from the area. Insiders have contributed pieces to the parts they have already written about. You find wholesome writings by Sujeev Shakya, Amish Raj Mulmi, Thomas Bell, Sushma Joshi, Tsering Tashi, Manoj Joshi, Catherine Anderson, Prajwal Parajuly, Janice Pariat and Indra Goswami. At best, the editor of an anthology has an onerous task at hand. You have to yoke together different writers while trying to stay on a smooth road to give your reader a smoother ride. This book, though well-intentioned, turns into a bumpy track. How do you balance a smooth armchair travelogue with the plod of a research paper?

Writing about the Himalaya is an onerous task. It’s a mountain range that spans a distance of almost 1,700 miles in length and between 100 to 150 miles in breadth, straddling eight countries rearing to a height of over five miles above mean sea level. They are their own superlatives: the highest mountain, the highest pass, the deepest gorge and  the highest-living animals. Confronting us is a phenomena that exists nowhere else on planet Earth.

Granted that it is not possible to cover the entire spectrum of life lived in the Himalaya. However, I would have liked to see more space for music, that is the very soul of Meghalaya. Or perhaps given some space to sports in Manipur, which invented that Game of Kings or the King of Games—polo; to this day, its football clubs leave their imprint all over the state. While passing mention has been made of the Maoist movement in Nepal or the aggressive posturing in Darjeeling’s Gorkhaland, the fact that the northeast has lived life under the shadow of the gun has been left out. Of course, Nepal suffered during the blockade, but then so did Manipur. What’s different?

The book stops short of turning into a telephone directory listing of those who write about the Himalaya: its dreamers, its poets and its writers. But it does give you a taste of the region, a sort of opening of windows through travellers and their travelogues. The chapters are almost standalone pieces that could well have been extracted from a well-researched book.Perhaps that oft-used Sanskrit proverb sums it up best: ‘A hundred divine epochs would not suffice to describe all the marvels of the Himalaya.’

Stay up to date on all the latest Magazine news with The New Indian Express App. Download now
TAGS
Himalayan Arc Namita Gokhake