'Feral Dreams' book review: The jungle that is not

Feral Dreams pays homage to The Jungle Book in several ways, but it is by no means a retelling.

In a scene in Stephen Alter’s Feral Dreams: Mowgli and his Mothers, an American missionary in India reads out Rudyard Kipling’s The Jungle Book to a young boy who has been brought to the orphanage she runs. Daniel, as she christens him, has been rescued from the jungle. Nobody knows who he is, or how he came to be there.

There are rumours—fuelled by his obvious ease with animals—that he was looked after by wild animals. Daniel, as he listens to Miss Cranston reading about Mowgli’s adventures with Baloo and Bagheera, is impressed.

He recalls: “…But as a child, hearing Miss Cranston read those words and give each animal a different voice, there was a mysterious yet convincing quality to the book that held my attention, though I never imagined this story could be mine.” 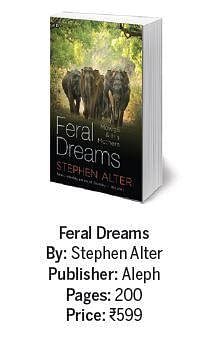 This is an apt description of Feral Dreams, because while the opening of the story is similar to that of The Jungle Book, Alter takes his book in a completely different direction. From those beginning scenes (which, as it emerges later in the book, are perhaps just imagination, no more) when ‘Mowgli’ moves with a troop of langurs and is shepherded by the elephant Mohua, the story shifts to a different space. From the jungles of Hathi Talao wildlife sanctuary to the mission compound and children’s home run by Miss Cranston is not very far as the crow flies, but for the boy, sick and starving, hovering on the brink of death, it is a long, long way. The talking animals, the happy adventures and the innocence of Kipling’s book is not the way Alter envisages the world of his protagonist. This child lives in the 60s, in a Rohilkhand where poachers and dacoits strike terror. And predators of another kind masquerade as ‘good’ people. The world outside the jungle is, as ‘Daniel’ finds out, probably more dangerous.

The contrast Alter builds between the two ‘mothers’ of his protagonist—the elephant and Miss Cranston—is as interesting as the contrast between the two worlds. Worlds, too, from which Daniel finds himself unceremoniously wrenched and catapulted into an alien world. His rebirth and finding his place again, and his relationship with the ‘mothers’, is the basis of a poignant, thought-provoking story. Feral Dreams pays homage to The Jungle Book in several ways, but it is by no means a retelling. It is a rethinking of the ‘wolf child’ trope that plays out in books such as Tarzan of the Apes. A child, alone in the woods, and looked after by wild animals—but what if the wild animals take the form of human beings, and what if the woods are really the big, bad world outside the forest?

As much as the story of Feral Dreams, it is the way Alter evokes the jungle, as well as the world outside that, is remarkable about this book.

Stay up to date on all the latest Books news with The New Indian Express App. Download now
TAGS
Feral Dreams book review