Giving ‘Nai Disha’ to Maoists in Jharkhand who shun violence

JHARKHAND: Not long ago, Rampado Lohra prepared uniforms, propaganda magazine covers and backpacks for the Maoists. He now stitches uniforms for policemen in Ranchi — thanks to ‘Operation Nai Disha’ launched by the Jharkhand government to rehabilitate Maoists.

The work has given him an opportunity to start afresh, earn a living and lead a dignified life with his family members.

Lohra was a part of the squad of wanted Maoist ‘commander’ Kundan Pahan. Lohra surrendered to the police in 2013. Since then stitching uniforms for policemen is a way to atone for what he did. “In the company of the outlaws, there was a constant fear of getting killed by security forces. The surrender changed my life completely,” says Lohra. The hide-and-seek with the police was a daily affair; nothing was definite. And after every escape, he held himself responsible for his condition. 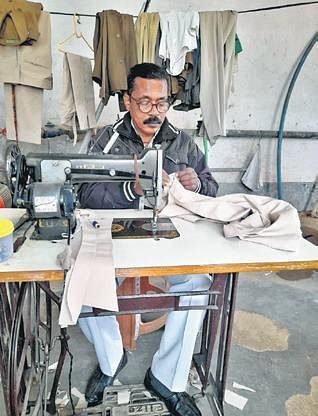 His family, friends and relatives avoided him. He was unwelcome at social gatherings. Soon, he made up his mind to leave all that behind. Lohra now visits his relatives in a normal fashion and nearly Rs 15,000 a month, an amount adequate to meet his requirements. “Leaving was easier said than done; it was risky. Yet I had in my mind the respect of my family and a resolve to lead a dignified life,” says Lohra. He came in contact with then SSP late Praveen Singh and told him that he wanted to join the mainstream under the operation.

Singh accepted his offer, but with a condition that he would have to prove that he was interested in joining the mainstream, which Lohra did well by giving crucial information about hardcore Maoists and their hideouts. After keeping him waiting for three years, he was made to put his guns down before the police on October 29, 2013 in Ranchi. Since he had four FIRs lodged against him in different police stations of Khunti and Ranchi, Lohra was sent to jail for three years immediately after the surrender.

“I had already damaged the Maoists by tipping off the police, so I was provided accommodation in Police Lines in Ranchi and given a space inside the pump house to earn a living by stitching uniforms for policemen,” says Lohra.  There are several like Lohra. Reshmi Mahli was also a hardcore Maoist before she joined the mainstream in 2011. With a commitment to lead a peaceful life, Mahli requested the district administration to provide her space to open a canteen.

It was promptly accepted. She was provided space at the district collectorate and she started her ‘Reshmi Canteen,’ making a judicious utilisation of Rs 1.5 lakh given to her under ‘Operation Nai Disha.’ “I didn’t want to ruin the life of my eight-year-old son,” says Mahli. She has been running the canteen since 2013 and earns enough to take care of her family. Mahli joined the rebels in 2006 when she was a Class IX student at Girls’ High School in Bundu.

Till 2008, she went around with gun-toting Maoists and was a member of Kundan Pahan’s squad. Gradually, she became a member of Nari Mukti Sangh and rose to the rank of secretary. Similar is the case of Naitu Kumari, 22, who is pursuing her graduation in history (honours) from Panch Pargana College in Bundu. Naiti was made to leave home by her parents to join the Maoists when she was 12 years. After remaining with the Kundan Pahan squad for three years, she decided to shun violence and join the mainstream in 2014. After her surrender, she passed 10th and 12th boards. “I don’t want to recall those horrible days. I expect to get a government job,” she says.

Govt’s surrender package for Maoists
Besides providing land for constructing a house, the govt gives Rs 6 lakh in cash  Rs 2 lakh at the time of surrender and the rest in two annual installments to the surrendered Maoists. The loan amount for providing job opportunities to a surrendered Maoist has also been raised from Rs 2 to Rs 4 lakh