Transforming maoist hotbed into a tourist hotspot in Jharkhand

JHARKHAND: In March 2017, soon after taking over as the divisional forest officer (DFO), Lohardaga, Vikas Kumar Ujjwal was on a field visit. A few metres from the Kuru Forest guesthouse, where he was staying, Ujjwal was taken aback when he spotted hundreds of villagers carrying illegal firewood from a nearby forest. When enquired, the locals told him that they didn’t have anything else to do for their livelihood and hence, were going to sell them at a local market.

After a brief discussion with other forest department officials, Ujjwal realised that rampant forest fires, destruction of Salgi forest in Kuru range of the Lohardaga forest division, violence between government forces and Maoists were the issues that needed immediate attention in the region. In the next three years, this young 2014-batch Indian Forest Service (IFS) officer transformed this Maoist-infested jungle in Lohardaga in Jharkhand into a tourist destination that has led to a host of economic activities.

Looking at the poor state of affairs, one thing that Ujjwal had committed to himself was to bring order in the area — in terms of forest management and the livelihood for villagers.  But he knew it very well that it was going to be an uphill task, to begin with. The Salgi protected forest was not in the best of shape. There was hardly any dense patch remaining; range staffers were reluctant to enter the forest, citing Maoist threat. These problems had drastically reduced the overall green cover of the protected forest, spread over an area of about 5,000 hectares, that dried up natural water streams.

Ujjwal decided to take the local community on board so that forest conservation and livelihood could go hand in hand. “I found that the people in the region were primarily dependent on forest wood. We picked the Salgi forest first as it was crucial for the water security of Jharkhand, since three important rivers — Damodar, Sankh and Auranga — originate from there,” says Ujjwal.

He then organised several rounds of meetings with the villagers as most ideas were suggested by them.
“Initially, they were reluctant. But gradually, after a few meetings, they agreed on protecting forest patches adjoining their villages. In return, we promised them to create livelihood opportunities,  and took up soil moisture conservation work in the catchment area of Namodag waterfall, conducted beekeeping training and distributed kit to 150 villagers, and held bamboo craft training programmes.

We also inducted a few villagers as fire watchers and for construction of check-dams and other entry-point activities as per gram sabhas’ recommendations,” says the forest officer.  He also points out that these activities would have been insignificant and futile without a sustainable plan that had the potential to address both forest management and bring a socio-economic impact of a bigger proportion. “Thus, the Namodag ecotourism was developed under which joint forest management committee (JFMC) members started managing every activity — from entry to exit of tourists.

A nominal fee is charged from every tourist and in return, members of the van samiti provide facilities such as parking, trekking, guide, etc. Active support from the district administration and engagement of local villagers has ensured direct livelihood to at least 40 people on regular basis,” says Ujjwal. There has been an increased patrolling by the forest department based on inputs from JFMC members to nab offenders involved in the illegal timber trade. 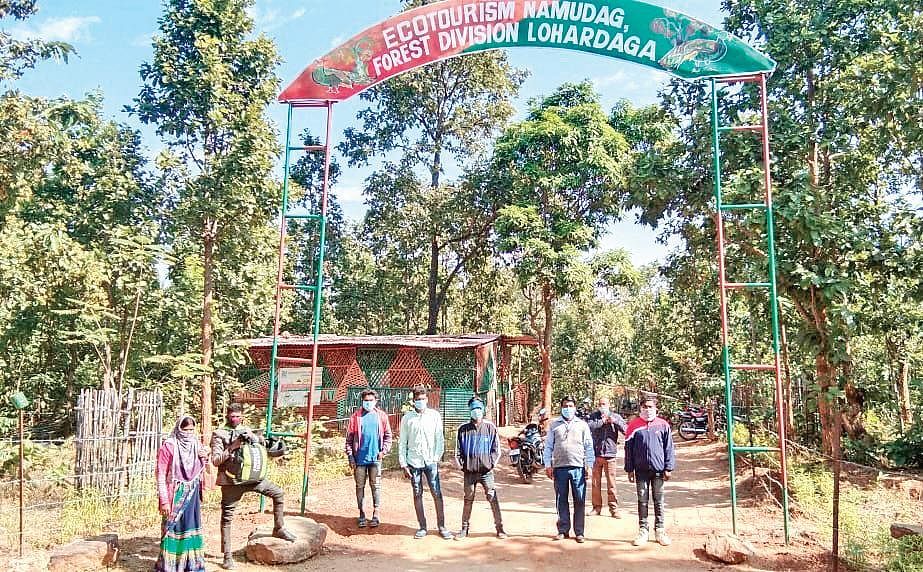 Interestingly, Ujjwal says, the registered count of tourists visiting the Namodag ecotourism crossed 2.5 lakhs since its inception in 2017, generating enough revenue for the local community. “Later, an awareness programme was launched for the conservation of forests and people started connecting themselves to the direct benefit of forest conservation. Gradually, the illegal felling of trees was reduced by 80-85 per cent due to rejuvenated JFMCs and the density of forest also started showing tremendous improvement,” says Ujjwal.

Recently, there have been signs of the return of wildlife animals such as sloth bear, deer, porcupine, fox and other species, the officer adds. In 2017 itself, three lakh saplings of local varieties were planted across the forest land and nearly 20 check dams and man-made ponds were developed by the forest department. Locals say Ujjwal has transformed Namodag, known for having the highest railway bridge in Jharkhand, into a tourist hub. “Now, Namodag is on the tourist map of Jharkhand.

Several check-dams have been constructed all over the forest to provide drinking water to wild animals,” says a villager, Satish Shahdeo. The success at Namodag has inspired many other van samitis. They are now planning to replicate potential eco-tourism sites at Dhardharia, Lavapani, Chulhapani, Juriya and other places. Amidst the planning and execution, Vikas was threatened multiple times from anti-social elements. But that did not deter him from doing his job.