Rajesh Patil is from a small village of Maharashtra, who kept a promise made to his ‘tai’ when he cleared UPSC exams to become a municipal commissioner, reports Sudhir Suryawanshi

MAHARASHTRA:  Rajesh Patil, a 2005 Orissa cadre IAS officer, is on deputation in Maharashtra as  Municipal Commissioner of Pimpri Chinchwad Municipal Corporation. Patil is the son of a marginal farmer in a small village of Jalgaon district of Maharashtra. He has to his credit a small book – a sketch of his life – titled ‘Tai mi collector vhayanu (Mother, I have become a collector).’ His story begins with his childhood days when he found himself working odd jobs to help his debt-ridden family.

“I am the only son with three sisters. Our two-acre land was irrigated with the help of a well; we depended largely on erratic monsoon rains. The income was meager, so we had to work on others’ land in our village,” recalls Patil. He had to skip his school and go out for work. 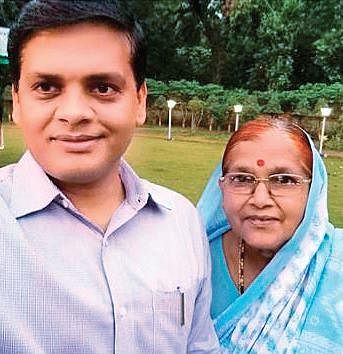 “I was good in my studies, but my hours were spent on working at farms. Somehow, I nurtured a dream to become a collector -- the highest administrative posting in government. I realized that if we were to get out of our poverty, the only thing I required was good education. So, I would study no matter how physically drained I was,” says Patil. He was a naughty, mischievous boy. “I played with kids, playing pranks on them. Like most of them, I too stole things and betted on insignificant things. Then, my mother drilled some sense into me, turning my attention to book reading. That changed my life. My mother played a pivotal role in my success,” says Patil.

“Once we had to mortgage our home. I was about to get a job, but my parents told me not to worry about the family’s financial condition. They wanted me to focus on my objective to become the collector. Even as I struggled making a tough choice, whether to support the family by joining some work or pursue my aim, my parents stood by me,” Patil says.

After completing his primary and secondary education in government schools in the Marathi medium, he overcame the language barrier. “I’d tell my farmer-mother that one day I would make her the collector’s mother. I tried four times for the UPSC exams. I made it in my fifth attempt. I called my mother to say: ‘Tai, mi collector vayanu’.”  The book is his attempt to guide thousands of youth from rural India dreaming to clear competitive exams.

The Collector says he has seen corruption at local bodies since childhood. “For a birth or death certificate or a benefit of a government scheme, rural people go through many bureaucratic barriers where at times they have to bribe some officials. I want to make a few changes in the panchayat raj system. I think if those changes are made, the system would be more responsive and directly benefit the intended people,” says Patil.