Girl falls in love with movie hero, a visually-challenged teacher, & they marry

The girl manages to convince family members of her choice and the couple ties the nuptial knot with minimum attendance due to Covid regulations.

By A Satish
Express News Service

PALAKKAD: A visually-challenged teacher gets a role in a film. The digital age takes the promo of the film as far as northern India where a Malayali girl, incidentally also a teacher in Gwalior, Madhya Pradesh, falls for the hero.

The girl manages to convince family members of her choice and the couple ties the nuptial knot with minimum attendance due to Covid regulations. This storyline is not from any movie, but a real-life incident.

July 11 is special for Clint Mathew, a congenitally blind youth who after having become the hero of the Malayalam film Thahira married  Jossey Antony from Mannuthy in Thrissur at the St Joseph’s church in Sreekrishnapuram. 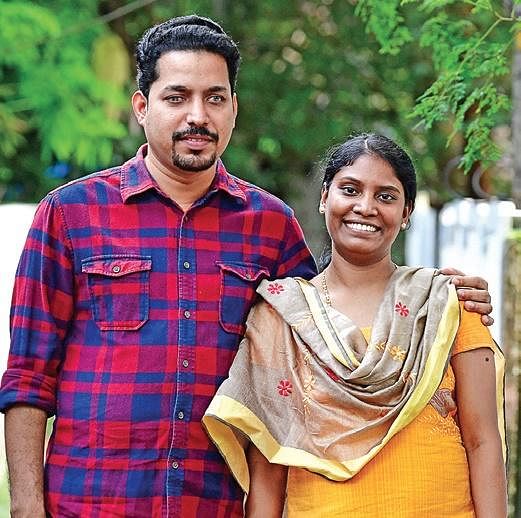 “I grew up in Panthallur hills of Nenmeni village in Malappuram district as the youngest child of my parents, K M Mathew, who was a plantation worker, and Philomina. After landing the post of assistant teacher at the Hellen Keller School for the Blind in Kottapuram near Sreekrishnapuram in 2014, I wanted to marry a normal girl. Though numerous proposals came, none of the prospective brides was willing to marry a visually-impaired person,” said Clint.

He blamed such an attitude on the outlook of society at large. “People look at vision-impaired persons with sympathy. The situation is no different in cinema. In Vasanthiyum, Lakshmiyum Pinne Njaanum, actor Kalabhavan Mani is portrayed in a sympathetic light. But in Oppam,  Mohanlal depicting a visually-challenged character projects a macho image. Or else, the visually-challenged are cast as comedians. However, these depictions do not gel with reality, “ he said.

The film Thahira is the cinematic adaptation of the life of Thahira from Azheekode in Kodungallur who slogs all day to feed her family. The film speaks about the empowerment of women and physically-challenged persons.

Siddik Paravoor,  director of the film, said, “Though I tried initially to get a heroine for the film, I couldn’t find a woman who could do all the manual work done by Thahira. Finally, I asked her to act in the film which she accepted after some hesitation.”

“Since we were on the lookout for a hero, who has to be visually-challenged and handsome, we approached the Kerala Federation of the Blind who directed us to Clint. Initially, he too was reluctant but finally agreed to play the role of Bichapu, husband of Thahira. Since the film was released three days prior to the lockdown, I am still not out of the woods having produced it also,” he added.

Jossey Antony said, “When I saw the promo of the film which was shown by a colleague, who is also a relative of Clint in Gwalior, what struck me was the individual’s level of confidence. He is ready to take up any challenge. My colleagues also encouraged and supported me.”

Life should have a meaning and this is possible only when we help others, added Jossey who is enjoying every moment with her husband. “It was for the first time that I travelled by air to New Delhi for the preview of the film held at the Kerala House,” says an excited Clint.

“My film changed the life of the hero Clint. Hopefully, it does the same for Thahira who remains single at 42,” he said.