Sainik School elated as Isaac comes up with surprise announcement

At a time when the SSK authorities were waiting for the next plan of action from the state government, the announcement by Isaac in his budget speech came as a surprise to them.

THIRUVANANTHAPURAM: Finance Minister T M Thomas Isaac had announced in his budget about shouldering the responsibility of taking care of the pension of the staff of Sainik School Kazhakootam (SSK).He blamed the Central Government for passing the buck to the state government when it was their responsibility to take care of the issues belonging to Sainik School Kazhakootam. The school authorities and the Old Boys Association representatives have conveyed their gratitude towards the state government’s gesture.

At a time when the SSK authorities were waiting for the next plan of action from the state government, the announcement by Isaac in his budget speech came as a surprise to them. The state government has agreed to all terms and conditions for the Memorandum of Associations (MoA), including pensions of the staff of SSK. Earlier, the finance department had agreed to shoulder only the school’s running with effect from April 1, 2021 to avoid the insolvency. 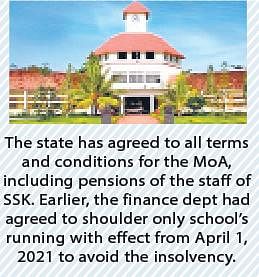 The SSK was on the brink of insolvency as its budget deficit had been increasing steadily since 2012 which led the current students, the school authorities and the Old Boys Association (OBA) to seek the state government’s help.On Friday, Isaac blamed the BJP Government for not taking up the responsibility of taking care of the pension expenses of the employees.

“The policy of the Centre has been to pass on their schemes to the state which includes the issue pertaining to SSK. The expenses to be borne by the state government have increased drastically which is highly deplorable. Even though it is a unilateral decision, the state government has decided to shoulder the responsibilities of pension benefits where an agreement will be signed and the interests of the school will be protected,” Isaac said.

The news brought cheer around the staff and students of SSK at a time when they have been gearing up to welcome 10 girl students for the first time in its history in the new academic year. Commander Sam T Samuel, president of OBA, told TNIE that he and his team are indebted to the state government and the finance minister for their wonderful gesture.

“So we will support the state government from our side, the state and the country,” said Commander Sam.
Currently, there are 605 cadets who are residential students and 15 day scholar girls (children of staffers), 85 serving employees and 108 pensioners and their families, for whom the pension has been their sole earning.

Stay up to date on all the latest Thiruvananthapuram news with The New Indian Express App. Download now
TAGS
Thomas Isaac Sainik School