Kerala Budget 2021: Industries and IT get funds, infra-tourism overlooked

In a major allocation, `20 crore set apart for GIFT City at Ayyampuzha, part of industrial corridor

KOCHI: The state budget has focused more on industries and IT sectors in Kochi while basic infrastructure development and tourism sectors failed to get major projects. A reduction in the value added tax on liquefied and compressed natural gas will be a major boost to the coveted city gas project.The Startup Mission operating in Kinfra Park received an allocation of `10 crore for a technology innovation zone and `59 crore for youth entrepreneurship development scheme. 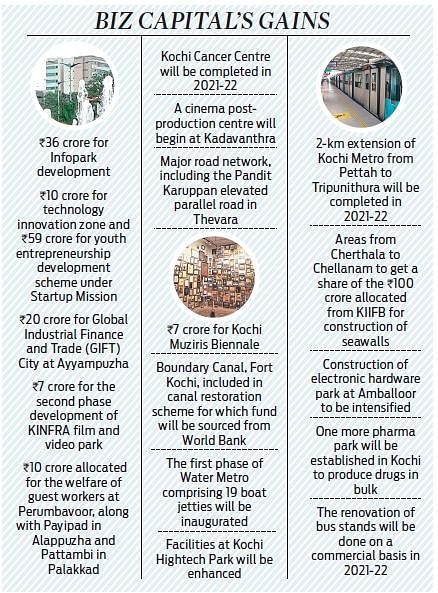 Finance Minister Thomas Isaac announced `36 crore for the development of Infopark. For the second phase development of the KINFRA film and video park, `7 crore was earmarked. The facilities at Hightech Park too will be enhanced.

The industrial segment will receive a major boost with the Global Industrial Finance and Trade (GIFT) City at Ayyampuzha, for which an amount of `20 crore has been allotted.Coming up on 220 hectares, GIFT City will be a part of the Kochi-Palakkad industrial corridor.

The Kochi-Mangaluru industrial corridor, however, focuses on the development of the Malabar region. One more pharma park will be established in Kochi to produce drugs in bulk.

It will also benefit industries in and around Kochi. The industrial corridors will also help in the development of then city. Around seven proposals submitted by Cochin Chamber have reflected in the budget,” he said.

From the basic infrastructure perspective, the budget mentioned only three new proposals. While the FM stated Kochi will get a major road network including an elevated parallel road at Thevara, the fund allocation was not mentioned.

The Boundary Canal in Fort Kochi is  included in the Canal Restoration Scheme funded by the World Bank. The renovation of bus  stands in Ernakulam will be done on a commercial basis in 2021-22.S Gopakumar, president of the Better Kochi Response Group (BKRG) said, though the budget focused on the welfare of each individual, it was disappointing in terms of addressing the city’s development.

“The budget couldn’t address the basic development of Kochi which contributes heavily to the state’s revenue. We had high hopes that issues like waste treatment and water supply will be addressed in the current budget. Kochi Metro and Water Metro too didn’t get new fund allocation. Development activities too contribute to uplifting lives,” he said.Thomas Isaac announced that the extension of Kochi Metro to Tripunithura will be completed by 2021-22.

Stay up to date on all the latest Kochi news with The New Indian Express App. Download now
TAGS
Kerala budget Kerala Budget 2021