Delhi government notifies one farm law, examining the other two

However, BJP and Congress attacked AAP for its support to farmers agitation while notifying the law.

NEW DELHI:  While Chief Minister Arvind Kejriwal and Aam Aadmi Party has extended support to the protests against the three new farm laws, the Delhi government has already notified one of them and examining the other two.

According to a senior government official, the Farmers’ Produce Trade and Commerce (Promotion and Facilitation) Ordinance, 2020 was notified on November 23. “The remaining two laws are under examination by the development department,” he said.

Officials said that vegetables and fruits were deregulated in 2014 enabling trading beyond agricultural produce marketing committee managed mandis. The notified law adds foodgrains and poultry to the list.
Defending the decision, AAP in a statement said, “These are now laws in the entire country.

No state has the power to independently implement or reject these laws... that’s why farmers are protesting.” However, BJP and Congress attacked AAP for its support to farmers agitation while notifying the law. “The notification exposes duplicacy of AAP and the Kejriwal government. They want to share the benefits of the new farm laws while misguiding the farmers,” charged BJP MP and former Delhi unit president Manoj Tiwari.

The mandis have not been dismantled and they are continuing. Farmers demand is that they should get minimum support price (MSP) whether inside or outside mandi which AAP supports, added the statement. 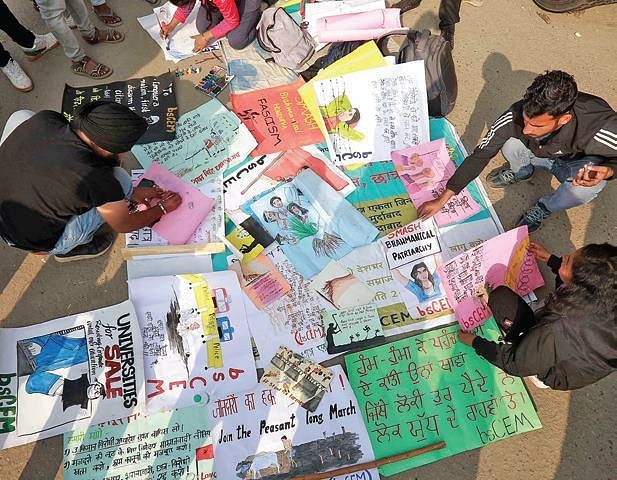 Students Show solida rity with po sters
Students from Delhi on Tuesday put up posters and pictures at Singhu Border to highlight the plight of farmers across the country and create awareness on a range of issues. Ravinder Singh, a student of Law Faculty at DU, said many issues are ailing the country and the students want to create awareness about them.

Earlier, students from different universities joined the protesting farmers by singing songs highlighting their condition. Rajveer Kaur, another DU student, said people were given sheets and colours to make posters in support of the farmers. The posters were displayed on a wire tide on a truck later in the evening.