Despite many CCTV cameras being present in the vicinity, authorities now and in the past, still have not nabbed even one offender.

CHENNAI: Regulation of disposal of biomedical waste in Tamil Nadu seems to be lax even as the state has gone through the Covid-19 pandemic and many people lost their lives. On Saturday, activists found heaps of biomedical waste dumped alongside the service road of Nazarathpeth near the Ponnamalle Municipality in the suburbs of Chennai.

Pughalvendhan V, who has been identifying bio-medical waste dumped illegally for several years now, spotted this first on Saturday. He said it was not removed even on Sunday.  “This is dumped near the Miyawaki forest in Nazarathpeth and despite being dumped in the open, authorities have turned a blind eye,” he said. 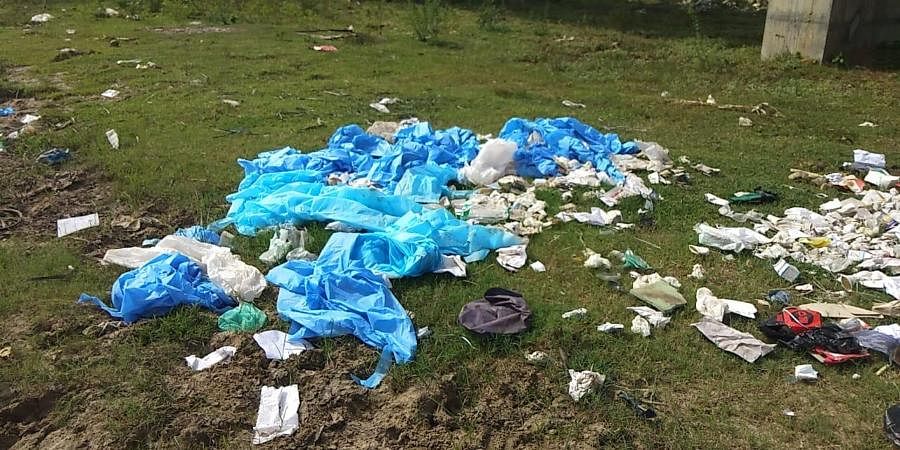 Used syringes and injections can possibly a grave threat for those coming in contact with it. However, despite many CCTV cameras being present in the vicinity, authorities now and in the past, still have not nabbed even one offender.

TNIE in 2019 had written about biomedical waste being dumped in the same vicinity of Nazarathpeth but no offender was held.

READ HERE | Dumping in public places continue, but only two cases registered in 2019

Pughalventhan said that he had filed an RTI to the Central Pollution Control Board, seeking action taken based on his complaints to previous instances of dumping of biomedical waste.

However, he said, he got replies which were irrelevant to his complaint and of some other locations. “They did not give an accurate reply but gave a reply for some other location. I mentioned the complaint number, reference number too but this reply did not correlate with them,” he added.

The Madras High Court too, in 2019, directed the secretaries of State Health department and  Tamil Nadu Pollution Control Board to make periodical inspections once in two months of all the medical institutions to check the implementation of bio-medical waste management Rules, 1989 as amended in 2016.

TNIE too had reported in November, 2019, citing that despite more than dozen reports on biomedical waste dumping being reported a year, authorities had registered only two cases totally.

FROM ARCHIVES | Biomedical waste found dumped by the streets in Chennai

Despite the National Green Tribunal taking Suomoto cognizance of media reports, authorities have failed to act.

Pughalvendhan says that every time he raises a complaint with TNPCB or the Drug Control Board, the local municipality authorities just clear the waste. “No action is being taken on offender. Only if action is taken, these crimes will stop,” he said.

When contacted, TNPCB officials said they would look into the issue. Express has also shared the images of open dumping of biomedical waste with the officials.