The gift of reading, one student to another

BENGALURU: While the pandemic has changed the way we perceive education transforming physical classes into online teaching it has also had a negative impact. With schools and libraries shut, there is a decreasing interest in children towards reading and learning.

During these uncertain and trying times, three Class 12 students from Bengaluru came forward to help students in rural areas. Under the guidance of Uma Mahadevan, Principal Secretary of Rural Development & Panchayat Raj, they launched the ‘Right to Read’. Under this initiative, they have been collecting books from people and donating them to rural libraries for children.

Praneet says the trio was looking for ways to help the student community during the pandemic. “Recently, we came across many newspaper articles on government schools shutting down, and realised that students are disconnected from regular education. Unlike private schools, government schools have struggled to conduct classes for thousands of rural students, who did not have access to online facilities,” he said.

The boys began the donation drive from their apartment. “We started with setting up boxes around our apartment community and sending messages to residents, urging them to donate books. During a span of three weeks, we made regular visits and collected the books placed in the boxes. Although initially, we received very few books, eventually, the residents were eager to donate. Fuelled by their kindness and our efforts, we were able to collect all types of books ICSE, CBSE and IGCSE textbooks, story books, novels and magazines,” Praneet added. 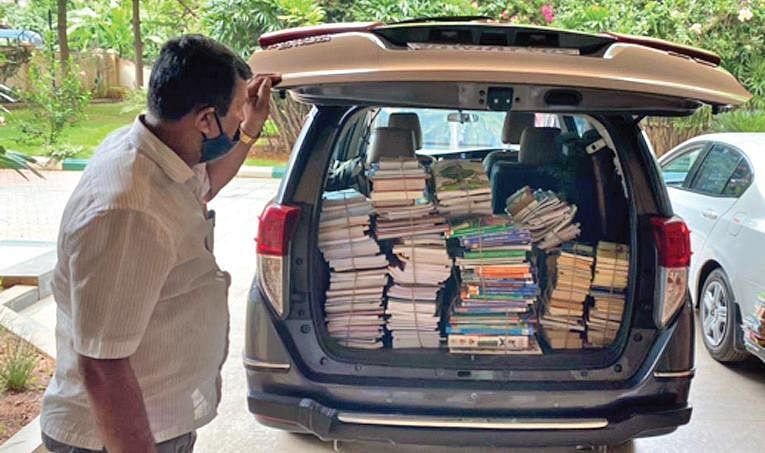 “We sorted out the donations and with the help of Ms Mahadevan, we were able to transport the books to a facility, where they were allocated to rural libraries,” he said.

“People were happy to know that the books they no longer require, will be of use to children in need,” Aryan said. “Now that word has spread in our community, neighbours and residents have been calling us to check if they can donate books. We hope to get a similar response from other residential communities also,” he said.

Earlier, the team had planned to make it a one-time event as they were not sure if people would donate books. However, Shankar said, “Due to the overwhelming response, we have now decided to make this an ongoing campaign and expand it as much as possible,” he added.

Mahadevan says there are 7,000 libraries in the state, of which 5,622 are in gram panchayats of Karnataka. “Last year, we started a programme ‘Oduva Belaku’ to improve these libraries — add children’s sections, upgrade them to digital libraries in a phased manner, and give free membership to rural children between the ages of 6 and 18 years,” she added. “The donated books will help children in rural areas stay connected to reading and learning,” she added.

Not just these students, the government is also collecting donated books from Bengaluru and rural areas through the ‘Pustaka Jolige’ programme. “Many voluntary organisations like the Azim Premji Foundation, Shikshana, and Pratham Books have supported the programme. We want all rural children to have access to reading and learning. Our libraries are now open for six hours a day, even on weekends,” said Mahadevan. She added that it’s a great initiative for rural libraries. “Their commitment is truly commendable,” said the senior bureaucrat.

Stay up to date on all the latest Bengaluru news with The New Indian Express App. Download now